Honduras: Emergency response to the floods in Cortes – HND171

According to official data provided by COPECO, the flooding has had the following impact on Honduras:

Additionally, Tropical Depression Selma formed in the Pacific at the same time as a tropical disturbance in the Atlantic according to COPECO’s National Centre of Atmospheric, Oceanographic and Seismic Studies, producing moderate to strong rains, especially in the country’s south central and western parts.

According to data collected by COPECO in the affected communities, the floods has critically damaged main livelihoods and food stocks. The floods have affected the crops, forcing many of the affected families to change their diets and implement survival strategies; for example, affected farmers have begun selling their agricultural products at a very low cost, which will affect their income generation. Water distribution systems are affected and water is not safe for drinking. Lastly, due to deterioration of residual water and excreta management systems, the affected population is at risk to water and vector-borne diseases and other dangers to their health. There is urgent need of food, water and sanitation support and livelihood restoration.

The ACT Honduras Forum through its local member Mennonite Social Action Commission (CASM) by it´ Spanish acronym, is responding to this crisis by providing Food security, WASH and livelihood recovery to 1463 households. The target for this appeal is $109,875.04 USD to provide humanitarian relief. 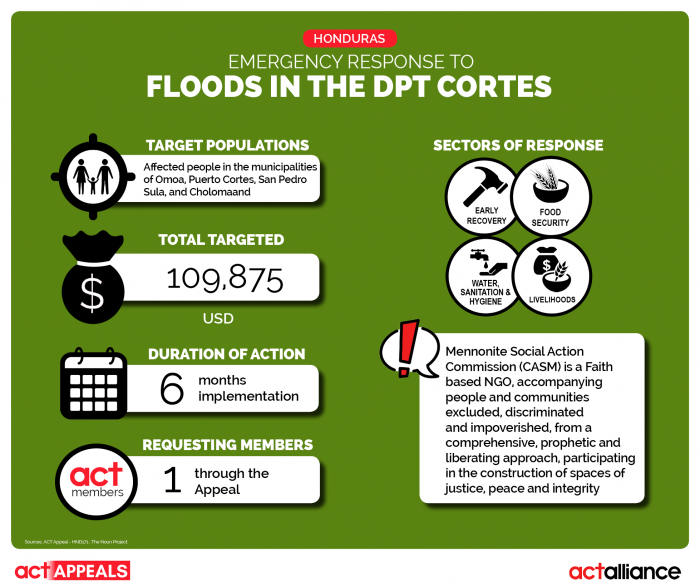