In the evening of 12 November 2017, the Governorate of Halabja region, North-East of Iraq experienced an earthquake in the magnitude of approximately 7.2-7.5, according to European-Mediterranean Seismological Centre (EMSC). The epicentre of this earthquake is located 32kms from the city of Halabja. According to the Global Disaster Alert and Coordination System (GDACS), approximately 1,840,000 people live within 100km of the epicentre of this earthquake in both Iraq and Iran. Local experts seismologists in the area see potential occurrence of such shocks in the future as the area has entered into a new level of intensity, and therefore it is likely that future earthquakes will be of a same or higher magnitude.

There have been nine reported fatalities and over 550 people injured in Iraq as a result of the earthquake, according to the Kurdish Regional Government (KRG). The Darbandikhan areas has been most severely impacted, with most earthquake related injuries reported in Darbandikhan, Halabja, and Garmyan districts. Many houses in the areas of Darbandikhan, Maidan, Qurato and Bamo have been damaged and/or destroyed. According to the KRG, damage to the infrastructure is most severe in Darbandikhan, where landslides have blocked the Darbandikhan tunnel, while work to clear and open the road is ongoing. The water and electricity network of Darbandikhan is also damaged and requires significant repair. The water treatment plant in Halabja is partially damaged and produces clean water at only 50% capacity.

According to the KRG, the situation is stabilizing; NGOs in the area are coordinating with each other on further actions and locations. ACT Alliance response is needed since a gap in adequate interventions will lead to affected people leaving the area as a consequence of bad living condition. This is a frequent effect of post-earthquake situation, when the response is either missing or inadequate. Right now, the proposed action comes at a point in time when the affected population is still willing to stay in the area, and rebuild their livelihoods with some humanitarian support. 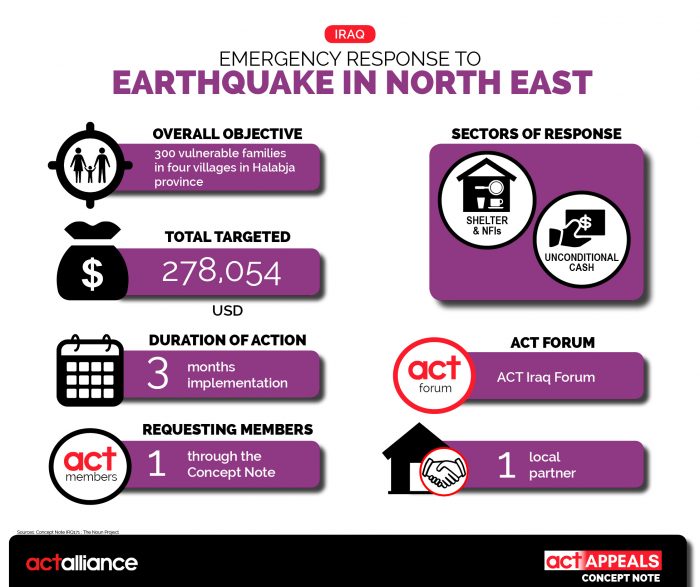