Four countries (Nigeria, Niger, Cameroon and Chad) in the Lake Chad region are affected by the on-going, Boko Haram conflict. As the needs continue to increase, this slow-onset “forgotten” crisis is urgently requiring attention to save lives and maintain human dignity. Approximately 21 million people live in the conflict-affected areas, of which 2.6 million are displaced and in dire need of support. The conflict has had devastating effects on the region; visible not only through the widespread destruction of homes, livelihoods, infrastructure and large-scale displacements, but also in the conflict-induced trauma and fear in the affected communities. The situation in the region is deteriorating as humanitarian funding is decreasing as result of donor fatigue and States are unable to provide adequate services to the affected communities.

The ACT forum members in Nigeria (Christian Aid and Norwegian Church Aid), Chad( Lutheran World Federation) and Cameroon( Lutheran World Federation) are planning to respond to the crisis through the ACT Appeal by providing support to in Food Security, Water, Sanitation and Hygiene, Protection/ Gender Based Violence, Early recovery and Livelihoods restoration, Peace and Psychosocial Support sectors to the conflict affected population in the Lake Chad Region. The overall appeal target budget is US$2.6Million. 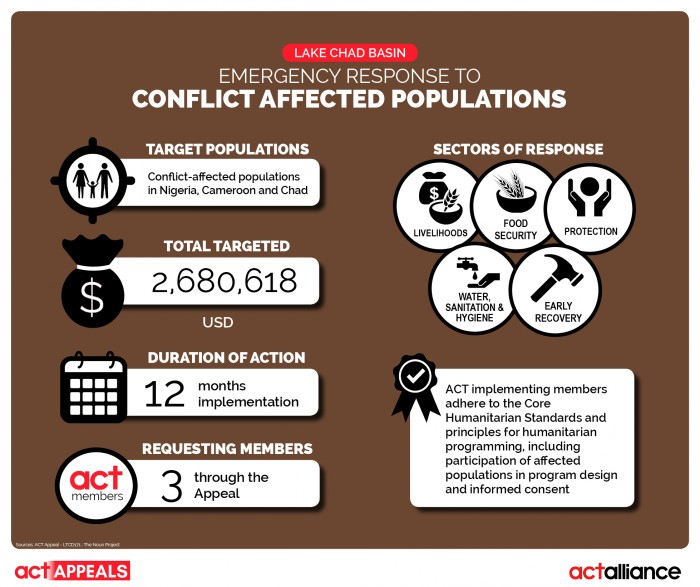