On the evening of the 14th August, mudslides triggered by three days of heavy rains poured in and around the capital of Sierra Leone, Freetown. The most severe mudslides occurred in the coastal suburb of Racecourse on the city’s eastern edge, as well as in Regent and Lumley where thousands of makeshift settlements are home to the city’s poorest communities. Torrential rains have led to a series of significant floods and mudslides in several areas of Freetown. According to Freetown Mayor, rescue workers have recovered 270 bodies so far mainly from the Regent neighborhood where the mudslides happened. As rescue operations are still ongoing, the death toll is expected to rise. An estimated 3,000 or more people are believed to have lost their homes and are in immediate need of emergency assistance and shelter according to Sierra Leone’s Office of National Security (ONS).

The ACT Sierra Leone Forum, via the Council of Churches in Sierra Leone (CCSL), will respond to the Freetown mudslides crisis with a 59,957 USD Rapid Response Fund.

This Rapid Response Fund, published on August 21st, got revised on August 25th. The government decided to move the affected population to a different location and cater for the housing. Targets/allocations were revised based on this changing context and to avoid duplication. Consequent changes in needs have been reflected by a reduction in Shelter of about USD 8,000 and increase in Food Security of about USD 7,500 and WASH about USD 500. The provision of emergency shelter materials was removed (as well as the assistance in location of housing), NFIs distribution remains unchanged, and the additional Food and WASH items will enable the 100 targeted households to have a longer secure period. 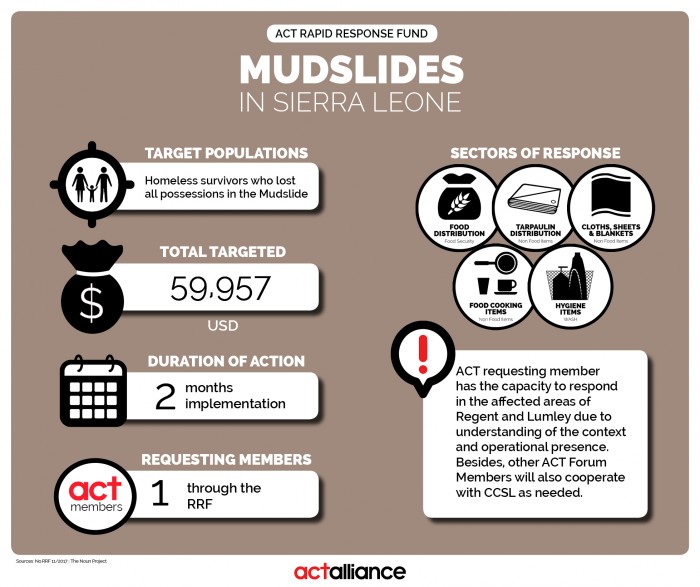