The conflict in Rakhine started in 2012 and displaced about 140,000 individuals. During the period 2015-16, about 25,000 IDPs were resettled near their original home by the government. On 9 October 2016 an armed group attack on border guards in Northern Rakhine and the retaliation by the Myanmar army caused severe unrest and affected the lives of thousands of people especially in Northern Rakhine. The violence intensified further on 25 August 2017. According to the Inter Sector Coordination Group (ISCG) of the UN, 427,000 people are reported to have crossed the border since 25 August.

As this is a cross-border crisis which impacts Myanmar and Bangladesh, a coordinated and complementary humanitarian response among ACT Alliance members in the countries is necessary. Consequently, ACT Myanmar Forum members (Christian Aid and LWF) will respond to this crisis in Myanmar by providing Shelter/NFI s, Food Security, Protection/Psychosocial, Early Recovery/ Livelihoods, Unconditional Cash and Community Resilience programs. The ACT Myanmar Forum is now requesting for 1,500,000 USD to run the program. Over 19,000 households and 12,500 individuals will be benefited by this intervention. Any indication of funding or other support is encouraged to be made in the name of the ACT Myanmar Forum, and allocations will be made according to agreed mechanisms among requesting members.

ACT Bangladesh Forum (Christian Aid, DanChurchAid, Diakonia Sweden, ICCO Cooperation) will assist over 6,600 households or 39,600 individuals in Bangladesh.  ACT Secretariat will share the detailed Concept Note (Emergency Assistance to the Rohingya Community) from ACT Bangladesh Forum in the next email.

As part of the revision of the ACT Alliance Humanitarian Response Mechanism, the “Preliminary Appeal” is replaced by the “Concept Note”, a shorter more concise document which summarizes the proposed ACT response and emphasizes collaboration amongst the ACT members. For further information on the Revised Humanitarian Response Mechanism, please refer to its online toolkit : https://actlearn.org/course/view.php?id=236 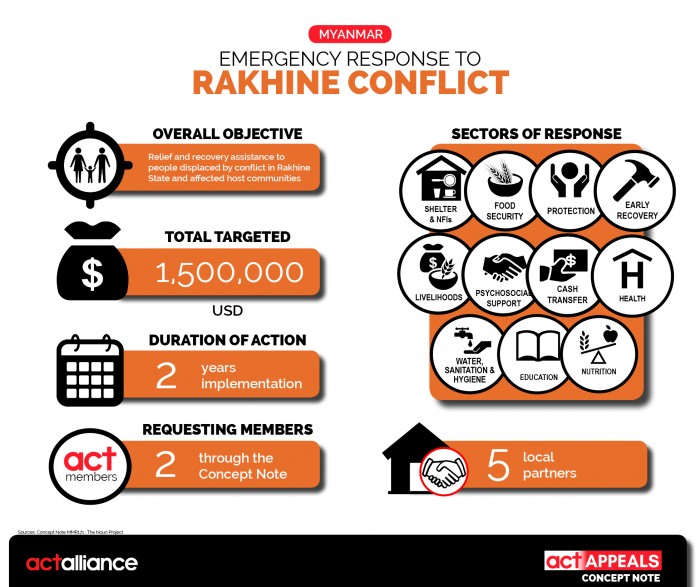