On May 23, 2017, the Armed Forces of the Philippines (AFP) launched a military and law enforcement operation in Marawi City, Lanao del Sur province in Mindanao, in pursuit of Abu Sayyaf leader Isnilon Hapilon, who was believed to be the designated leader of the Islamic State in Iraq and Syria (ISIS) in the Philippines. His forces fought back with reinforcement from the Maute Group, a local militant group that has pledged its allegiance to the ISIS. This led to a firefight between the AFP and the Islamic extremists, which has displaced a total of 353,358 persons or 74,981 households from the 96 barangays of Marawi City and 20 municipalities of Lanao del Sur. Of the total affected population, 4,086 households/18,294 persons are currently staying in 78 evacuation centres while 70,895 households/335,064 persons are staying with their relatives tracked in 7 Regions (NDRRMC, July 5, 2017).

Latest data from the government (Ibid) revealed that there are 418 reported dead and 209 reported missing, though more are expected because of the continuous airstrikes and ground assaults from the opposing parties. The insecure situation has not allowed any detailed damage assessments to take place; however, extensive damages are expected on homes, livelihoods and infrastructures, including academic and religious structures. The President of the Philippines declared Martial Law in the Mindanao group of islands on the same day of the conflict, while Marawi City declared the State of Calamity on May 25, 2017. 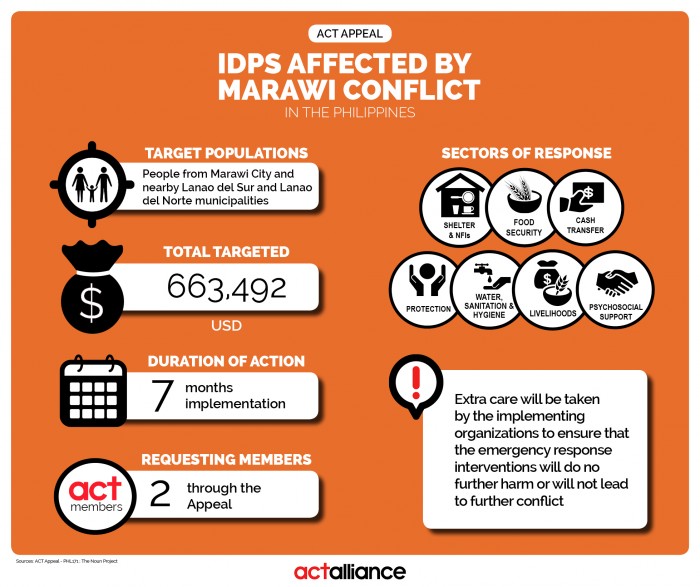