In the evening of Monday the 18 December 2017, the district of Kanungu, Kisoro and Bundibugyo in Western Uganda, experienced a heightened influx of refugees from the Democratic Republic of Congo (DRC) fleeing violence in North Kivu and Ituri regions. That week was characterized by two major developments: the unexpected surge of arrivals to Kyangwalli Settlement through the Lake Albert route and the arrival of Congolese refugees to Kyaka II settlement. More than 40,000 Congolese new arrivals have been received in Uganda since 1st December 2017.

Rwamwanja settlement which used to receive Congolese refugees entering through South-West Uganda has since reached full capacity, prompting the government to reactivate reception of new arrivals in Kyaka II and Kyangwali settlements. The settlements face numerous challenges including shelter, poor access roads, lack of infrastructure and inadequate access to clean and safe water. There are resentments within and among refugees arising from challenges posed by the situation as well as existing grievances from country of origin. In addition, LWF has recorded 102 GBV cases who have so far been supported with psychosocial support.

Two ACT Uganda members involved in this appeal are Lutheran World Federation (LWF) and Uganda Joint Christian Council (UJCC) both having extensive experience in their fields to respond.

Lutheran World Federation (LWF) has been operational in Uganda since 1981 providing humanitarian support to South Sudan and Congolese refugees. Uganda Joint Christian Council (UJCC), as a local national organization established in 1963 has a vast experience of community peace building and conflict transformation among refugees and host communities.

The overall objective is to ensure new arrivals have access to protection, shelter, WASH and are able to live in a peaceful environment. The Appeal targets 30,000 refugees both old and new caseloads in Kyangwali Settlement, Hoima district. 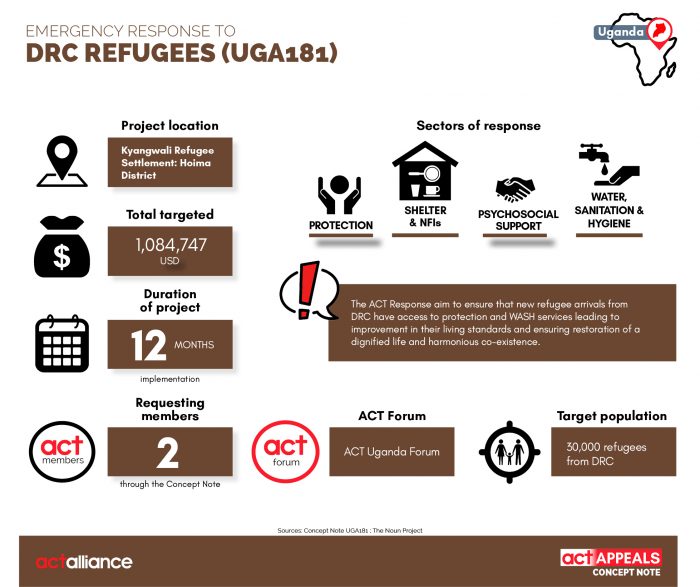