14th April 2020
In April 2020, CWS Japan launched a new project called “Citizen Social Worker Development Programme” with two other FBOs in Japan. To start with, we have recently published a training guidebook for citizen social workers for emergency disaster response.
During the last operation for Typhoon Hagibis, we witnessed some cases of vulnerables left behind who were elderly with dementia and family with intellectual disabilities. These cases are only the tip of the iceberg. These people tend to be isolated from communities even in peace time. In this project, we focus on elderly, disabled people, migrants and minorities who could be vulnerable to disasters. When disasters occur, all the public services including welfare services become dysfunctional due to the overflow of information and requests from ordinary citizens.
We are currently establishing a framework for mutual help in communities through citizen social workers’ training as well as networking with churches and FBOs in Japan as a part of our DRR scheme for ACT Japan Forum. At the time of next disaster, ACT Japan Forum would like to play a role in dispatching caseworkers and volunteers to rescue those vulnerable people in the affected sites.
Additionally, we also developed a questionnaire sheet for evaluating the vulnerabilities of target groups as an annex to the booklet which will be used for household surveys. By utilizing these tools, We are hoping to make invisible vulnerable people to disasters to be more visible to serve.
For more information please contact Ms. Yukiko Maki, CWS Japan, E-Mail y.maki@cwsjapan.org. 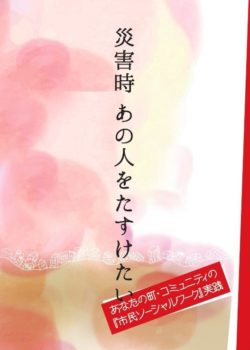