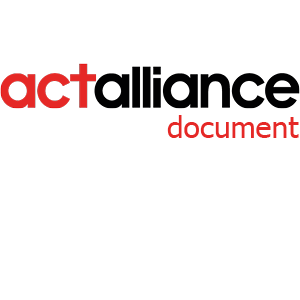 UN climate negotiations which are concluding today in Bonn, Germany, have not made significant progress towards the anticipated climate change agreement in Paris in December, ACT Alliance has said.

The international humanitarian and development network said that while negotiators from many countries participated with a good exchange of ideas on the different elements of the draft text under negotiation, the general slow pace meant that very little advanced into substantive negotiations.

“The sense of urgency required in view of the few months remaining before Paris in December, was simply not there,” said Mattias  Söderberg, chair of the ACT Alliance advisory group on climate change advocacy, who led the alliance delegation that attended the talks. “We cannot afford to delay the process, because the consequences would be unbearable for the efforts towards climate action. Therefore  we keep calling on governments to step up and use the next –  and final – session of negotiations in October meaningfully.”

Söderberg highlighted that some progress has been achieved in the negotiations relating to loss and damage and applauded this, stating: “We hope the governments will find a way to include it as part of the Paris agreement.”

However, he added: “We expected more progress in this session considering that parties had a text which had been prepared by the co-chairs  in good time. Having followed these meetings we see no credible justification for the delays and lack of meaningful steps forward. Now, we can only hope that previous failures in the UN talks, similar to what we saw in Copenhagen 2009, will not be repeated.”