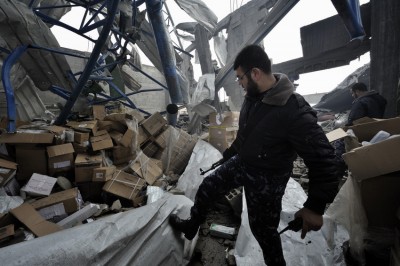 “We, as members of the ACT Palestine Forum composed of local churches and church-related development and humanitarian organizations, are deeply concerned about the loss of life and human suffering we experience across Palestine and in Israel these days.

The current escalation of violence is alarming. Thousands of women and men, girls and boys, have been injured and many killed since 1 October.

In Jerusalem, the rest of the West Bank and Gaza we experience the killing of both Palestinian and Israeli civilians, use of excessive force by Israeli police and army against protesters, extra judicial killings, collective punishment in the form of severe restrictions of movement, closure of Palestinian neighborhoods and punitive home demolitions in East Jerusalem.

We condemn all of this violence and we are convinced that violence cannot solve the conflict. We are convinced, however, that we will not see an end to the conflict without an end to the Israeli occupation. Administrative detention, the continued blockade of and dire humanitarian situation in Gaza where thousands still await rehabilitation and reconstruction of their homes, settlement expansion, house demolitions, severe movement restrictions and other violations of basic rights throughout the occupied Palestinian territories by Israel are depriving Palestinians their internationally recognized rights, create immense human suffering and provides no hope for the future generations. The current political situation is in no ways sustainable.

The ACT Palestine Forum calls on the international community to address the root causes of the conflict by redoubling its efforts to safeguard international
humanitarian law and human rights and to open negotiations underpinned by
international law that will bring an end to the Israeli occupation and help end the human suffering and insecurity felt by both Palestinians and Israelis.

In light of the escalation of violence and violation of basic rights, the ACT Palestine Forum members, as faith-based organizations committed to non-violence and the rule of law, appeal to the international community for measures to protect the civilian population.

At the same time, the ACT Palestine Forum calls on religious leaders of all faiths to work together with political leaders to protect all of the Holy Places in Jerusalemand throughout the Holy Land and demand that the Israeli government cancel its recent decisions preventing free access of Palestinians to the Old City of Jerusalem, respecting and practicing the status quo towards Al Aqsa Mosque and all religious Holy Sites.

The ACT Palestine Forum stands in support of the statement of the Heads of
Churches in Jerusalem, released on 21 September 2015, concerning the recent
violence on the Haram al Sharif. The Forum encourages its partners to support and act upon this statement and the call of the Heads of Churches that “the existing Status Quo governing these sites needs to be fully respected for the sake of the whole community.”

It is in these days of unrest and instability, fear and hopelessness, that the voices of people of faith must be heard. The ACT Palestine Forum appeals to its partners around the globe to help carry the vision of peace, justice, hope, and dignity for Palestine and Israel, especially at times like now, when young and old alike are weighed down by despair and discouraged by the lack of a viable peace process.”