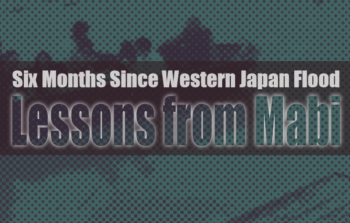 In June and July 2018, heavy rainfalls hit the western part of Japan. One of the most affected areas was a small town called Mabi in the Okayama prefecture. The embankments of the Takashi and Oda rivers broke down in eight different places and flooded almost one-third of the town. In many areas the water rose as high as five meters. About 4600 houses were affected and 51 people killed, most of whom were elderly.

A report by CWS Japan summarizes the key findings of the research done through literature and field visits between November 2018 and January 2019, carried out by CWS and supported by various Japanese institutions and ACT Alliance members. It highlights the findings as well as the steps taken in the aftermath of the disaster in order to strengthen community resilience, covering issues like flood risk communication, infrastructure, early warning, shelter management and health concerns.

The report contains good practices which have proven of value as well suggestions to strengthen response. Takeshi Komino from CWS Japan: “The lessons from Japan we believe are applicable in many areas. For example the timing of risk communication in midst of urbanization, the effectiveness of emergency evacuation communication from authorities, mobilization and management of various types of volunteers, optimization of human-centered information management, and the need for different sets of plans for the vulnerable part of the population.”