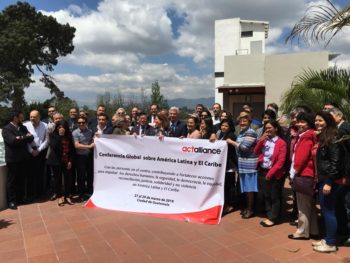 Participants in the Global Conference on Latin America and the Caribbean. Photo: CREAS

Today, the conference issued a statement of its results and commitments.

“Since June 2016, a wave of negative political events has added to the problems of Latin America and the Caribbean,” the statement reads.  “Countries in the region such as Venezuela, Brazil, Nicaragua, Guatemala, Honduras, Colombia and Haiti are experiencing an increase in social, political and economic crises…

“We have to be prophetic and have the courage to promote inclusive policies and agendas,” said Rudelmar Bueno de Faria, General Secretary of the ACT Alliance. “The challenges we are facing in the region require adequate strategies and concerted actions to uphold human rights and the rule of law.”

The statement lists a series of commitments made by participants, to:

Read the full statement here in English or Spanish.