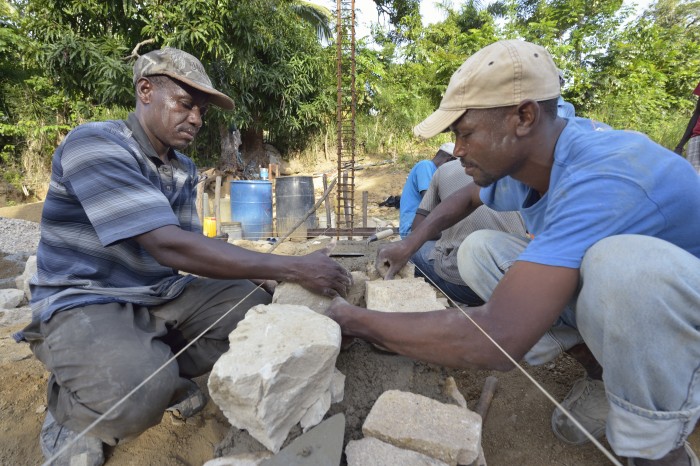 Ernst Beouchamp (left) and Saintorick Joseph place stones in the foundation of a house being built by Church World Service for a family that lost their home in Lareserve, a village near Jean-Rabel in northwestern Haiti, during Hurricane Matthew in 2016. Photo: Paul Jeffrey

Hurricane Matthew devastated Haiti on October 4, 2016.  In the year since the storm destroyed homes, crops and communities, and killed upwards of 1600 people, ACT members have been working with communities to bring humanitarian assistance and to rebuild.  In addition to helping families to repair and rebuild their damaged and destroyed homes, ACT members have worked with communities to rebuild community infrastructure.

In the community of Porrier, for example, ACT member Church World Service is rebuilding an elementary school.

“The storm took away the roof and left all our educational materials ruined. We’ve managed to continue classes in crowded, temporary spaces, but attendance remains down,” said the school’s director, Jean Asseker. “The children were traumatized, and their learning abilities were negatively affected. Their families lost their school books and uniforms. So it’s been a difficult year, but soon we’ll have a new roof thanks to CWS, and we expect that attendance will come back to where it was before. Our students will be proud of their new school.”

Lutheran World Relief, another member of the ACT Alliance, also works in several Northwest communities that suffered from Matthew. In Bassin Hady, a community where Matthew killed seven people, LWR helped villagers build a series of earthen dikes that hold back runoff during heavy storms, reducing erosion and improving soil fertility. It’s been hard work to move massive amounts of dirt and rocks, but Lucienne Tanasie says it was worth it.

“We’ll have more water and better soil, even though we have to wait a while for the dikes to do all that. We’ll be able to harvest more of our crops, thus earning money to pay the school fees of our children,” she said.

On the island of La Gonave, another ACT Alliance member, Service Chrétien d’Haïti, is supporting villagers as they rebuild the island’s deteriorated roads. Once a week, people turn out with shovels, picks, and their bare hands to remake the narrow arteries that wind through the rocky hills. “We do this to make our community beautiful. A better road makes it easier for motorcycles and cars to get in and out of here. That means we can more easily sell our harvest, and it will be easier when someone needs to go to the clinic, like a pregnant woman,” said participant Jacques Hirlaire Garisson.