Working together for Gender Justice at the CSW61

I am now at the Commission on the Status of Women (CSW) with a group of very engaged and active ACT Alliance colleagues mainly from our Community of Practice on gender justice. Tuesday (14) New York was practically shut down because of heavy snow fall. UN headquarters and most side events outside the UN building closed. But we were still able to hold the ACT side event hosted at UNFPA, on Protecting bodies, protecting Rights, dealing with religious and cultural laws that can have a negative impact on women’s human rights. We had a very packed room and excellent panellists who also braved the weather.  A red thread in the discussions was that religion is not the problem, but the misuse of religion to oppress and abuse women’s human rights is an increasing problem in many parts of the world and also in international work at UN and elsewhere.

We constantly hear very depressing news of harder struggles by the delegations at the CSW to even maintain human rights language in the text. It really saddens me that instead of being able to move forwards and build on what is already agreed upon in earlier CSWs and other UN gatherings, delegations have to work hard to even maintain the status quo. We need to move the gender equality agenda forward, to the benefit of women and girls and thus to society at large and we definitely cannot afford to move backwards! 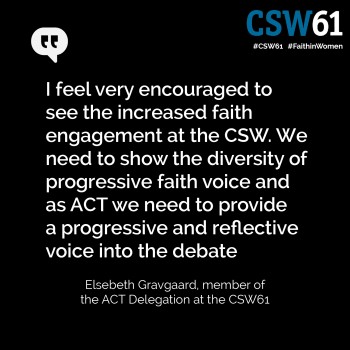 On a more positive note, I feel very encouraged to see the increased faith engagement at the CSW. We need to show the diversity of progressive faith voice and as ACT we need to provide a progressive and reflective voice into the debate.

I thus have a call to action to all ACT regional forums and all ACT members to engage actively in their own national contexts and help to elaborate and share religious narratives that contest religious fundamentalism and strengthen women’s rights and promote gender equality.

I encourage ACT members to join the national debates in their respective countries ahead of the next CSW and also to work closely with other civil society organisations including women’s organisations and other faith-based organisations on implementing the outcome of this one.

We have a lot of hard work ahead of us, but we need, now more than ever, to show that religious narratives can offer part of the solution and be supportive of human rights for all including for women and girls. In a very politicised and polarised world, ACT Alliance is well-placed to offer broader perspectives and opportunity for more reflective and inclusive dialogues, and it must do that. 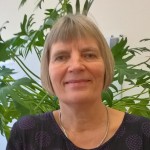 Elsebeth Gravgaard works as senior policy and advocacy advisor on Gender Equality and Active citizenship at DanChurchAid. She is also a long-term member of the ACT Communities of Practices on Gender Justice and previous chair of ACT Gender reference group.