The worst flooding since 1998 is scouring the arid landscape of coastal Peru. This Phenomenon has been affecting the country since January 2017. In February, there were damages due to the same reason in other geographical areas affecting 800 people, and an RRF of 59,072 USD was granted by ACT Secretariat to respond to the emergency (RRF04/2017, issued on 17.2.17).  The situation in Peru has kept worsening since then. The current situation has exceeded the local capacity to respond, the affected population have increased to 863,000 persons. The ACT Secretariat has approved to add 90,880 USD to the RRF.

Humanitarian needs are wide-ranging. Thus far it is estimated that 29,000 houses and dwellings have been destroyed or collapsed, affecting at least 120,000 people who are in immediate need for alternative shelter and other types of assistance such as water, sanitation and hygiene as well as protection. There is concern that levels of personal hygiene and sanitation are low, increasing risks of disease outbreaks, including acute diarrhoea, dengue and Zika virus.     The State of Emergency is in effect in 11 of the country’s 24 departments and one constitutional province, and a Health Emergency has been declared in 8 departments, affecting 655 districts. According to the National Office of Meteorology and Hydrography (SENAMHI, Spanish acronym), the emergency situation is expected to continue until the end of April. In the town of Piura, in Piura region, which is one of the most affected areas 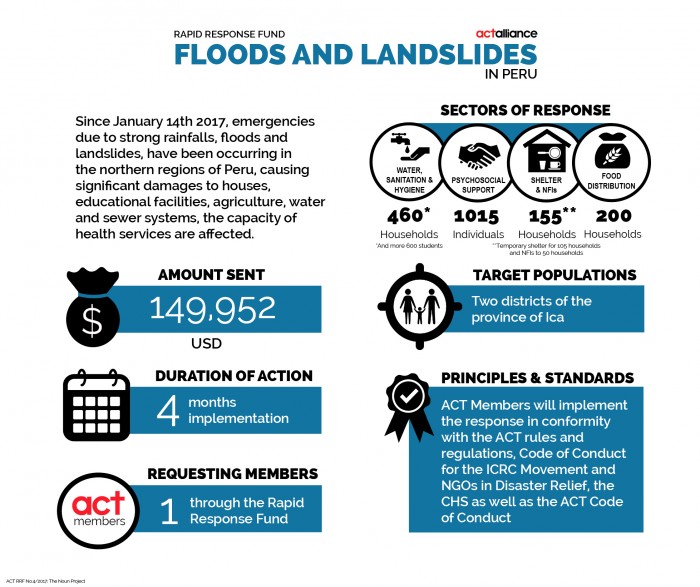