Hurricane Irma, a category 5 hurricane, with maximum sustained winds of 295 km/hour, one of the most powerful hurricanes ever recorded in the Atlantic, made landfall in Haiti´s northern coastline on September 7, 2017.  The eye of the storm passed north of Haiti, yet heavy rains, winds and flooding have cause significant damages in the Nord-Est, Nord-Ouest, Nord, Artibonite and Centre departments, damaging homes, fruit trees, flooding crops such as rice, banana, corn, sweet potato, cassava, and peanut and killing livestock. On the night of the hurricane, 12,539 persons were evacuated to 81 shelters. To date, 6,494 persons remain in the 21 centers. One life was lost and a person was recorded missing in the Centre Department, while 17 people were injured in the Nord, Nord-Ouest and Ouest departments.   Flooding of rivers caused partial flooding in 22 communes in the departments of Artibonite, Centre, Nord, Nord-Est, Nord-Ouest and Ouest. 4,903 houses were flooded, 2,646 houses were badly damaged, while 466 houses were severely destroyed. Signiﬁcant losses were also recorded in the agricultural sector in the departments of Centre, Nord-Est and Nord-Ouest.    In the commune of Bassin-Bleu, a church was reported to have been completely destroyed. The Institute of Social Welfare and Research and its partners supported 1,661 children from orphanages in the Nord and the Ouest, of whom 1,226 were moved to other non-flooding homes; In the Sud Department, approximately 300 people, the total population of the Dumont neighborhood, were moved to a temporary shelter in Port-Salut. They have returned home since the warning has been lifted.

SCH, a national member from the Haiti ACT Forum is the ACT requesting member for this response,  and had identify the following sectors as priorities: Food Security, non-food items and WASH. The ACT Secretariat has approved the use of USD 79,314.00 towards the budget from its Rapid Response Fund. 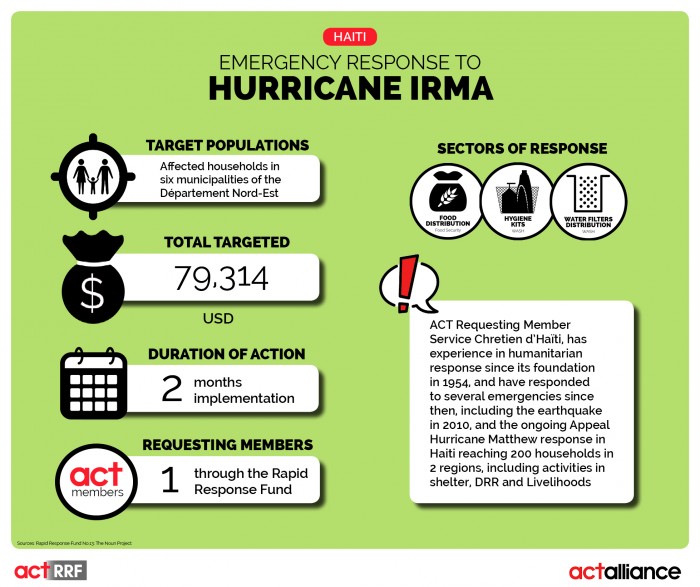