On the morning of Friday the 3 November 2017, the state of Chennai, Tamil Nadu in India, was severely affected by a low pressure area that had formed over Sri Lanka and South West Bay of Bengal bringing heavy and incessant rain falls to Chennai and Tamil Nadu. According to media reports twelve people are reported to have died due to rain related incidents. An estimated 250,000 people have been affected due flood in Chennai, Cuddalore, Kanchipuram, Tiruvallur and Pondicherry areas.

people have lost their livelihood, their clothing, little household food reserves were destroyed and their huts have been damaged. They are in need of food and non-food ( such as clothing) relief assistance from organisations and institutions. The daily wage workers, landless labourers and agriculture labourer are unable to go out for their work due to heavy rain and flood situation. Their families member are suffering due to lack of savings and food reserves. The flood affected people have requested UELCI to come forward and support with food and non-food relief assistance and save their lives in this crisis situation.

UELCI as a member of ACT Alliance is requesting this RRF through the ACT Alliance mechanism to respond and save 1575 flood affected households in Chennai, Cuddalore, Pondicherry and Kanchipuram districts

The Emergency relief program is proposed to be undertaken among the worst flood affected 1575 households in Chennai and Coastal villages of Tamil Nadu. Slum areas and villages are selected because they did not receive relief from the Government but severely affected by the flood. They lost their livelihood, food reserves and their mud houses are partially/completely damaged. They depend upon their daily wage labour, and due to floods they cannot get work hence struggling for survival. The UELCI has had a presence in the flood affected areas through the UELCI slum women advancement program in Chennai slums, and through member churches in the affected villages. The following places will be covered: Chennai District: 800, Cuddalore District: 800, Kanchipurm District: 400. TOTAL Households: 1575 Overall goal: The relief program improves the living conditions of 1575 flood affected house holds in Chennai and coastal area villages of Tamil Nadu. Objective: 1575 flood affected households have access to food and non-food ( cloths) in the crisis situation. Expected results: 1575 marginalised flood affected household lives are saved in the crisis situation

The ACT Secretariat has approved the use of US$ 40,000 towards the budget from its Rapid Response Fund 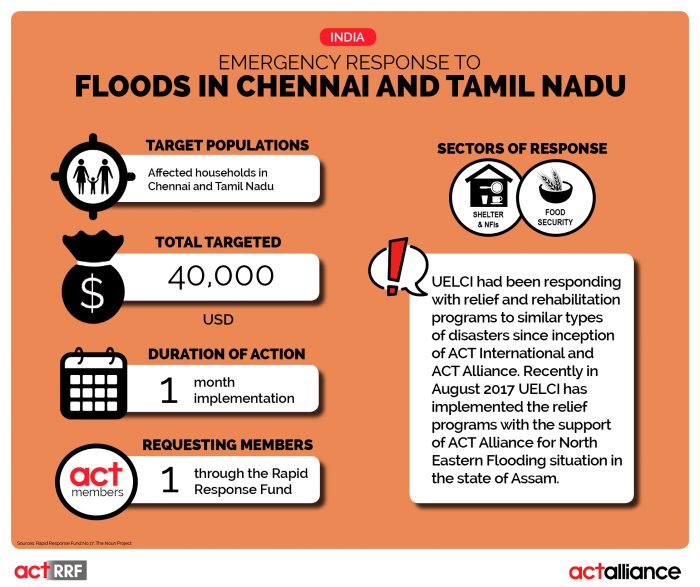