The volcanic activity from seismicity of Mt. Agung in Karangasem Regency, Bali Province, has kept increasing over the last weeks. On 22 September 2017 at 20.30 WITA,  the status was raised from orange alert (level 3) to red alert (level 4, the highest), by the Centre for Volcanology and Geological Hazard Mitigation (CVGHM). The high volcanic activity has put some districts in a state of emergency with any potential eruption in the future. National and provincial authorities reported the significant increase of volcanic activity and by 23 September 2017, the National Disaster Management Agency (BNPB) deployed initial team to assess and set up the command post. On 5 October 2017, the total numbers of IDPs at 427 points in 9 districts is 146,797.

Yakkum Emergency Unit (YEU), a national member from the ACT Indonesia Forum is the ACT requesting member for this response,  and had identify the following sectors as priorities: Shelter, non-food items, Health/ Nutrition, and WASH.  Although, YEU is requesting for USD 59,998  but considering the current funding level of the global RRF pot at ACT Alliance Secretariat,  ACT Secretariat has approved the use of USD 40,000 to the ACT Indonesia Forum in implementing the activities under this RRF.  However,  YEU remains positioned to receive additional contributions especially if a huge eruption occurs. . 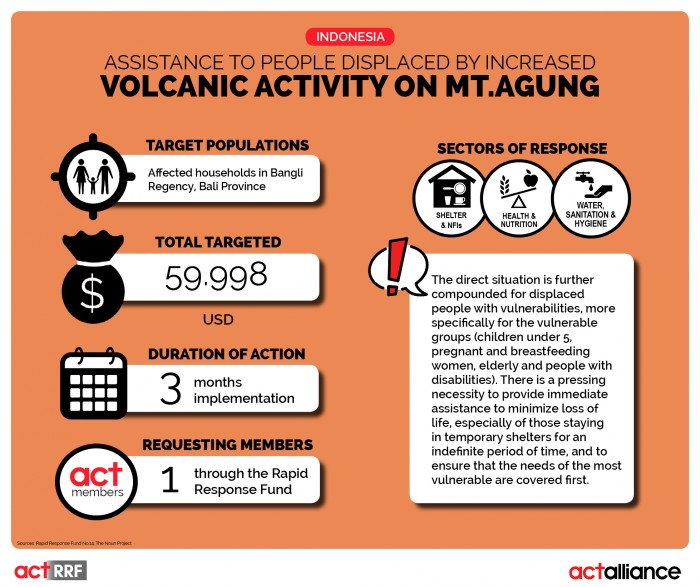