During the night of Friday 2 March 2018, Nairobi County and several parts of the country were severely flooded. On this day, flooding caused displacement of households, interrupted transport, swept away bridges and caused the death of 11 people nationwide.

Floods and heavy rain have continued to damage infrastructure, preventing or limiting humanitarian access to many of the affected areas and cutting off people’s access to markets in multiple locations.

According to OCHA Flash update #2 of 3rd May 2018, floods have now displaced at least 244,407 people (45,219 households) people across Kenya, including more than 23,000 displaced over the last week, as several parts of the country continue to receive heavy rainfall. The death toll has risen to 80 people, and 33 have been injured, according to the Kenya Red Cross Society (KRCS) search and rescue team. The highest displaced populations are reported in Tana River, Turkana, Mandera and Kilifi counties. In Nandi county, 243 households were displaced following a mudslide.

Floods have interrupted opening of schools in several counties as some school buildings are submerged or totally cut off.

The dire situation is further compounded for flood affected people with vulnerabilities, more specifically for woman and girls who are at a higher risk of gender-based violence in areas where displaced persons have sought shelter such as school’s compounds and other community centres.

ACT Kenya forum is planning to submit a funding proposal to provide food and non-food items and other essential needs to ensure that flood affected persons’ basic needs are met. National members of ACT Kenya forum have submitted an RRF to provide life saving interventions. 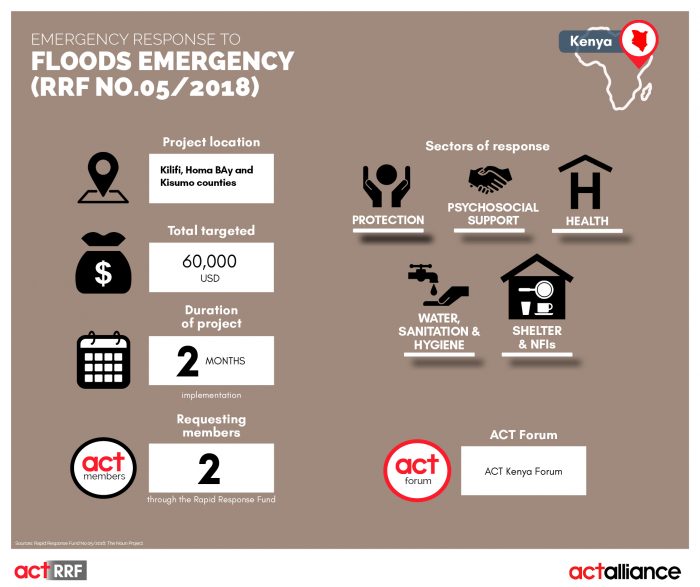