Madagascar has been successively hit by cyclones since January 2018. Three cyclones have consecutively struck the island; touching the coast, bringing heavy rains which have caused severe and heavy flooding.

On the morning of Friday 16 March 2018, the region of Analanjirofo, was affected by tropical cyclone ELIAKIM, which came with a maximum wind speed of 100 kph alternated by gusts of 130 kph. According to the National Office of Disaster Risk Management (NODRM), ELIAKIM caused 21 deaths, displaced 15 000 and affected 38 000 people.

This occurred while local communities were still recovering from AVA, the first tropical cyclone, followed by a second storm DUMAZILE.

In the North-Eastern and Eastern part of Madagascar, towns have flooded,  buildings have collapsed, crops have been destroyed, roads damaged and communications knocked down by storm ELIAKIM. Currently, in Analanjirofo Region, there are 12 647 affected persons, with 8 353 displaced in the District of Maroantsetra, Fenerive-Est and Soanierana Ivongo.

According to needs assessments done (information co-related with secondary data), humanitarian gaps are in the sectors of Food, Non Food Items, Shelter, WASH (kits) and protection/psychosocial support. School children are also affected as their school materials and food ratios were damaged. 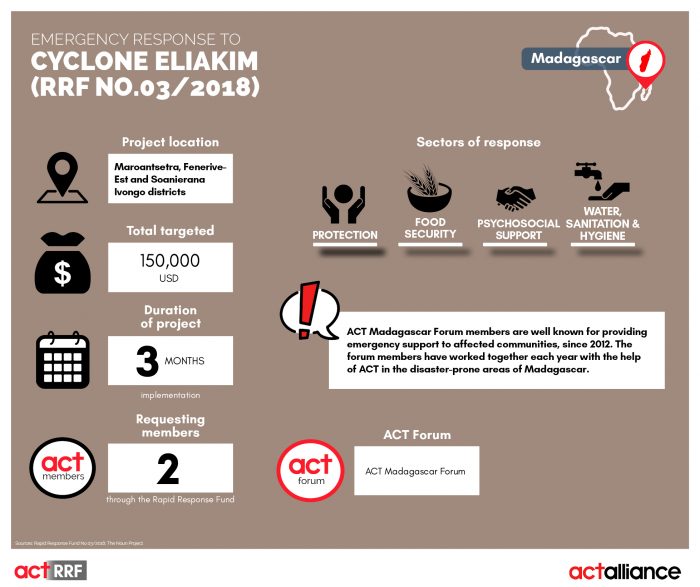