Tropical storm “Nate” formed on Thursday the 5th of October off the Caribbean coast of Nicaragua. The storm caused heavy rains and landslides throughout several countries in Central America. According to the report of SINAPRED (National System for Disaster Prevention), 73 municipalities from 11 departments were affected by heavy rains and winds (Chontales, Madriz, Boaco, Rio San Juan, Nueva Segovia, Triangulo Minero, Carazo, Rivas, Granada and the North Caribbean.). There are varying degrees damage throughout the 124 neighbourhoods and communities. 8236 houses were reported to have incurred some type of damage, of which 33 are totally destroyed; moreover, 6185 houses were flooded, and 27 remain at risk. 425 people were evacuated to solidarity homes. The Nicaraguan authorities have registered 16 fatalities as direct result of the storm. The government of Nicaragua has provided food supplies for more than 1600 affected households. The Ministry of Health has deployed 56 medical brigades composed of 544 health workers to the affected areas. Protection measures are being taken for vulnerable people in affected villages.

Data collected by the National System for Disaster Prevention in the affected communities indicates, that tropical storm Nate has critically damaged main livelihoods and food stocks. The population affected by Tropical Storm Nate in Nicaragua are in dire need of food, shelter, health services, access to safe water and restoration of livelihood. For this response the requesting member has identified gaps in food security. The Council of Protestant Churches of Nicaragua (CEPAD) is the requesting member for this response in coordination with Interchurch Center for Theological and Social Studies (CIEETS), to attend 700 households with food security. ACT Secretariat have approved 58,676.00 USD towards the budget from its Rapid Response Funds to attend the emergency. 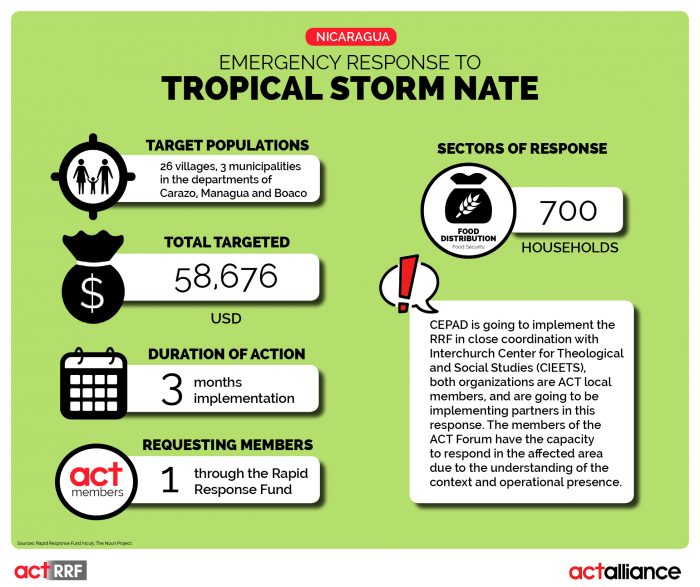