On 3 March 2017, Tropical storm Enawo formed in the southern Indian Ocean. The cyclone hit landfall in Madagascar on 7 March at around 10:30 am local time. Enawo is currently equivalent to a Category 4 hurricane. On 8 March, Enawo weakened from an “intense” to a “moderate” tropical storm. The remnants of Intense Tropical Cyclone Enawo exited Madagascar on the morning of 10 March. The storm traversed nearly the length of the island over two days, affecting communities from north to south across Madagascar’s eastern and central regions. The northeastern Sava region has sustained significant damage to housing and agriculture. Antalaha port is inaccessible and more than half of the city’s homes have been destroyed. Farahalana commune is flooded by Lohoko River, with half of all housing under water. In the Analanjirofo region, more than 10,000 people are displaced (IFRC, 8 March 2017).

The data collection continues and the floods are generalized through the island. The most recent Sitrep of the National Office for the Management of Risks and Crises (BNGRC) of 15th March 2017 – 06:00 pm gives the following preliminary impacts: 18 dead, 18 disappeared (peoples missing), 250 injured, 424,801 disaster victims, 246,842 displaced persons, 79,071 without shelter identified.

ACT Madagascar Forum members, SAF/FJKM and Malagasy Lutheran Church (MLC) in collaboration with the National Office of the Risks and Disasters Management (BNGRC), is planning to respond to assist with: 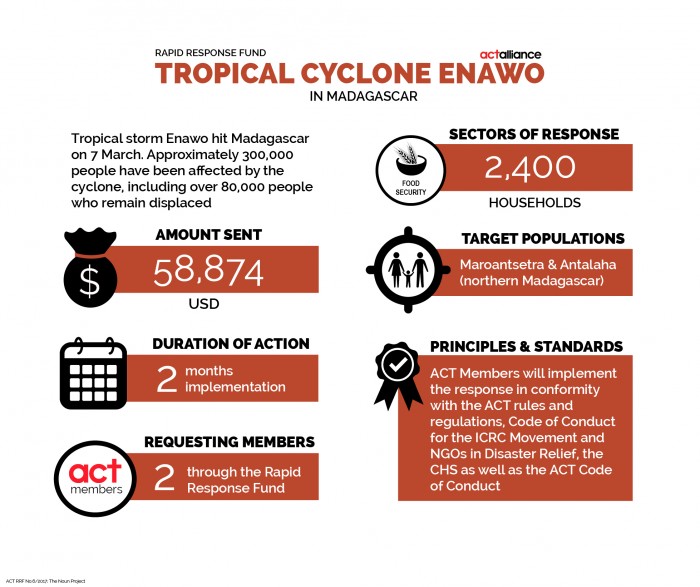